Here’s How our nopCommerce Managed Hosting Shoots Past The Competition

Unlike most other companies, we don’t try and claim to be experts in all web technologies and shopping cart software available on the web. We only offer service for shopping cart applications we know and have extensive development experience like nopCommerce. This helps us to optimize and fine-tune our platform specifically for those applications. nopCommerce storefronts hosted with Drundo are running at least 60% faster compared to storefronts running on the same shopping cart software hosted with other providers.

Below is a screenshot of the site response time report monitored by PingDom for www.firstcoastmedicalsupply.com (an ecommerce site running on nopCommerce) before and after the site was migrated to us. 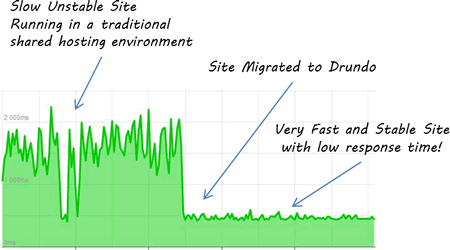 Another response time screenshot for a high traffic site www.speedindustry.com before and after the site was migrated to dual server configuration with us. 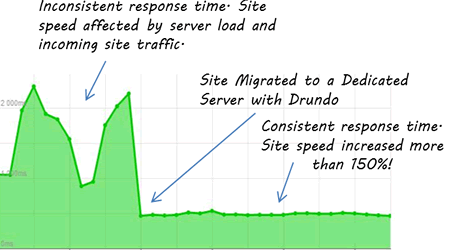 After the migration, the site has consistent response time and site speed increased more than 150%.

nopCommerce web site migrated to a cheaper hosting provider after being hosted with us.

The screenshot below shows decreased site performance and high response time for a nopCommerce web site migrated away to a cheaper hosting provider offering shared asp.net hosting for any asp.net based site. 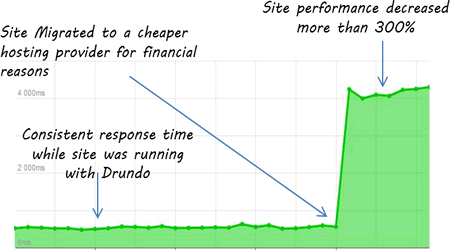 Why migrate my existing nopCommerce storefront to Drundo?

Our hosting solution is based on Cloud Services from the best Cloud Providers on the market. With more than ten years of experience with nopCommerce and Windows Server management, we have combined the best hosting components into a high-performance, secure hosting solution.

Our support team will work with you from day one and will take care of all the technical aspects of your website. The following services are included in your hosting account with us:

Why is your service more expensive than the average Asp.Net hosting provider?

The average hosting provider tries to cut cost by “overselling” server and database resources. Overselling means that they advertise “Unlimited” resources for low monthly fee hoping that you will never use those resources which is lying to you just to have you as a customer. In order to justify the low monthly fee they have to put hundreds of clients on the same server assuming that sites hosted for $9.95/month don’t get much traffic and visitors.

Our business model is different, we want our clients to succeed and get more traffic and more site visitors. We want to help real businesses who need fast, reliable and secure hosting service and have high requirements. This is why we have put together the best hosting components available on the market and our technical staff is ready help and meet your web site hosting requirements.

Are there any application pool or memory restrictions?

Each production web site runs under its own private dedicated application pool with no memory or CPU restrictions. We monitor each web site performance and our admin team gets notified in case site performance goes down or site is under attack.

Which nopCommerce versions are supported?

Most of our clients are running nopCommerce 4.x versions, even if your nopCommerce website is still running on older 3.x versions we can still migrate and host your sites.

Please contact us in case you have specific questions related to your specific nopCommerce version.